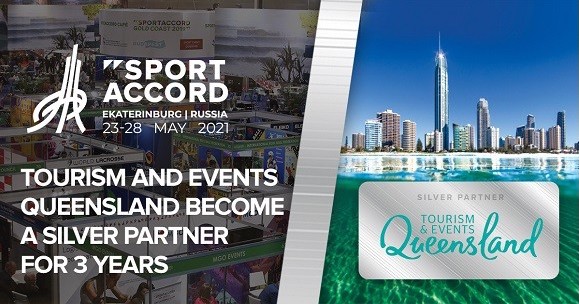 LAUSANNE, Switzerland – SportAccord has announced that Tourism & Events Queensland (TEQ) will be a Silver Partner of the SportAccord World Sport & Business Summit for the next three editions of the global sports industry’s most influential annual gathering in 2021, 2022 and 2023.

The long-term partnership will begin with next year’s highly anticipated event from 23-28 May at the IEC Ekaterinburg-Expo in the dynamic city of Ekaterinburg, Russia.

Tourism & Events Queensland (TEQ) played a vital role as a Host City Partner in the successful delivery of SportAccord 2019 in Gold Coast, Australia, which took place just a year on from the acclaimed 2018 Commonwealth Games in the same city.

SportAccord 2019 was recognised at a prestigious annual awards show for the Australian events sector in May 2020. SportAccord 2019 was selected as Platinum Award winner for Best Event at the 2019 Meeting & Events Australia (MEA) State and National Awards and also scooped the overall Government Event of the Year and Queensland’s Event Legacy Award.

“We are immensely grateful for the support of Tourism & Events Queensland,” SportAccord Managing Director Nis Hatt said. “TEQ proved to be an outstanding Host City Partner for SportAccord 2019 and we are delighted to be working with the organisation as a Silver Partner as it focuses on driving the state’s considerable post-SportAccord legacy opportunities.”

Leanne Coddington, CEO of Tourism & Events Queensland, said: “We are looking forward to building on the legacy of SportAccord 2019, which represented an unprecedented opportunity to showcase our world-class hosting capabilities. We are working hard to convert significant interest in Queensland into future events across the state and our SportAccord Silver Partnership will play a central role.”