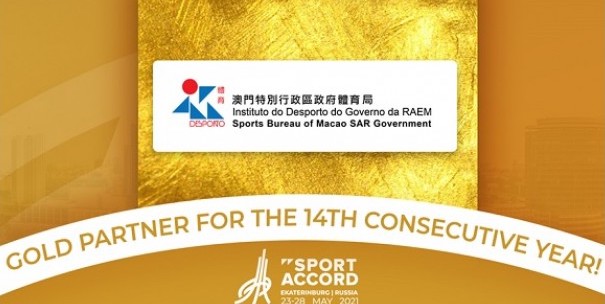 The Sports Bureau of Macao SAR Government has an established presence at SportAccord’s flagship annual gathering, having supported the event since the 2008 edition in Athens, Greece.

As a Gold Partner once again next year, the Sports Bureau will be provided with a prestigious platform for connecting with sport’s most influential decision-makers who will come together for a week of high-level meetings, engaging conferences and a bustling exhibition, from 23-28 May 2021.

The Sports Bureau seeks to promote sport at all levels with athletes and citizens alike. It focuses on creating the necessary conditions for the development of sport and plays an active role between sports associations, as well as encouraging citizens to lead a healthy lifestyle.

Nis Hatt, Managing Director, SportAccord, said: “The Sports Bureau of Macao SAR Government’s unwavering support illustrates the organisation’s commitment, not only to SportAccord and the World Sport & Business Summit, but also to staying at the forefront of the international sporting community’s minds with their continued involvement and support.”

Pun Weng Kun, President of the Sports Bureau of Macao SAR Government added: “We are honoured to return again as one of the Gold Partners for the SportAccord World Sport & Business Summit 2021 in Ekaterinburg. We look forward to enhancing Macau’s profile as an active sport city, making contributions to the positive growth and development in the global sport industry and being a significant part of the success of the event.”

The conference programme will feature six streams – CityAccord, HealthAccord, LawAccord, MediaAccord, the SportAccord Summit, and the new InvestAccord – with numerous influential speakers set to offer unmissable insights into a variety of vital areas in sport.

Registration is open for the SportAccord World Sport & Business Summit 2021 in Ekaterinburg.

Situated on the banks on the Iset River, Ekaterinburg is Russia’s fourth-largest city by population, and is a hotspot for tourism and business, as well as sport, as the home to numerous professional teams.

Organisations interested in becoming an official partner or exhibitor can contact SportAccord to discuss these investment opportunities by emailing sales@sportaccord.sport, with SportAccord also offering an interactive exhibition floorplan and 3-D flyover of the SportAccord 2021 exhibition space.