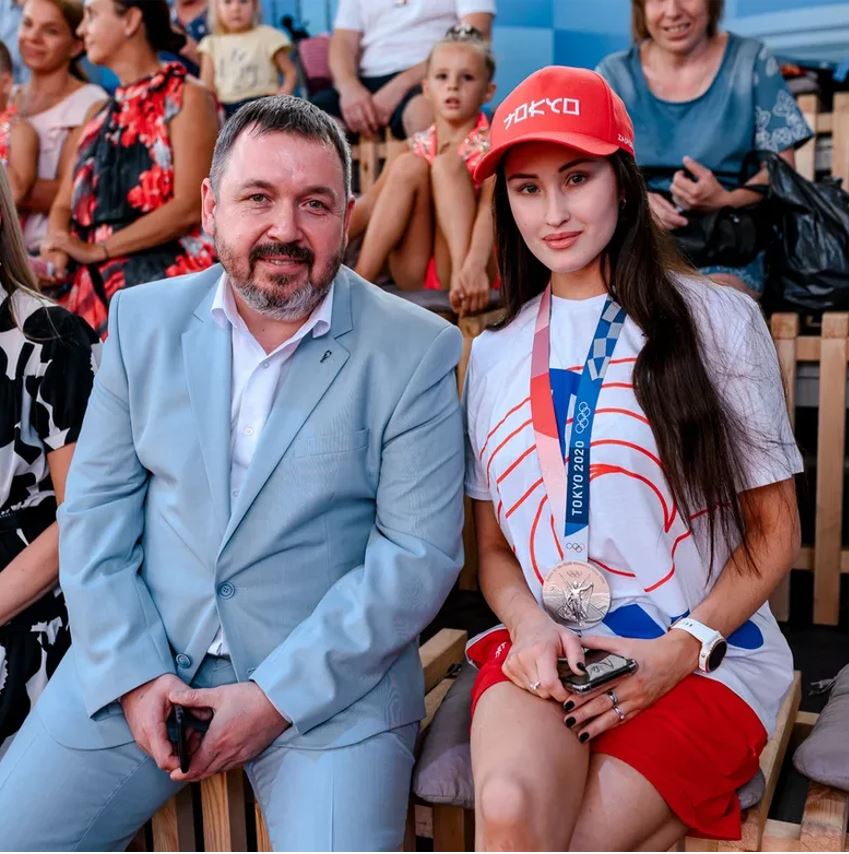 Ekaterinburg, Russia – Tokyo 2020 Silver medalist Anastasia Tatareva had her first meeting with young gymnasts and their parents in the centre of Ekaterinburg. There was no room to spare in the SportAccord World Sport and Business Summit pavilion, which became a platform for sharing.

Several demonstrations were held especially for the star athlete, and afterwards Tatareva was presented with an olive wreath, which symbolises peace and honour, followed by a round of applause. Such wreaths were awarded early in the history of the Olympic Games and were worth more than any other medal. This tradition continued until 1894, when the Olympic medals as we know them were introduced. And it was with the medals that the conversation with Anastasia began.

“I always take great joy in meeting children because I can set some kind of example for the girls. When I was a little girl, I used to look at the older girls with great joy. I remember how priceless it was when an woman athlete came and showed us the medals. And I also grabbed them and made a wish”, Anastasia recalls.

There were a lot of questions from young athletes. Anastasia talked about how she coped with the anxiety of entering the Olympic platform, about sporting fury and excitement, about her desire to prove that our gymnasts are the best in the world.

Interestingly, Anastasia herself saw the rhythmic gymnastics competitions for the first time at the age of three and when she returned home, she began throwing spoons at the ceiling. This is how her journey to international fame began — her parents decided to channel her energy in a sporting direction.

When asked why she chose to compete in the team and not as an individual, Anastasia said that this decision was proposed to her by the President of the Russian Rhythmic Gymnastics Federation, Irina Viner-Usmanova, who saw potential in her.

The questions kept coming; it seemed that the interest in the life and career of the Ural gymnast could not be quenched.

“Go for your goal, never give up, listen to your heart as well as your family. Because when you are at your best, the whole world is with you, and when you fail, only your loved ones are with you,” Anastasia advised the young gymnasts at the very end of the chat.

After that, Anastasia was surrounded again, but this time for an autograph and a photo with the Olympic champion.

“Such meetings are really necessary for the little ones. The more, the better. For them, this is inspiration — thanks to such conversations their motivation returns, they realise that things will go in the right direction. Our region is at the very top of this sport — we have a fairly high level of rhythmic gymnastics, and many girls make it into the national teams,” Anastasia said after the meeting ended.