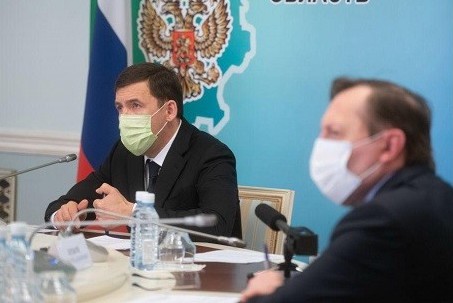 Posted on December 29, 2020February 12, 2021
On 18 December, Governor Evgeny Kuivashev held a meeting of the regional organising committee. The topic of the meeting was preparation for the SportAccord World Sport and Business Summit in Ekaterinburg.
The head of the federal subject noted that large-scale preparatory work has already been carried out, event venues have been approved, and the business program of the summit is being developed and coordinated with the Association.
“At the end of November, the SportAccord Association delegation visited Ekaterinburg for evaluation for the second time. A large number of thematic working sessions and meetings were held over the course of several days. All of them were held in a meaningful manner, allowing us to coordinate positions on the main blocks of preparation for the summit. As a result of the visit, we received a lot of positive feedback about the work done. Still, there are still many tasks ahead that require serious attention,” said Evgeny Kuivashev.
During the meeting, the participants discussed the key tasks of preparing the event, including issues of operational cooperation with the Ministry of Sport of the Russian Federation – the co-organiser of the summit. First Deputy of the Federal Agency Azat Kadyrov thanked Evgeny Kuivashev for “meaningful work and efficient decision-making”.
Evgeny Kuivashev expressed confidence that the federal subject’s experience in hosting large-scale international events, as well as the joint work of all responsible parties, will provide for an eventful World Sport and Business Summit.