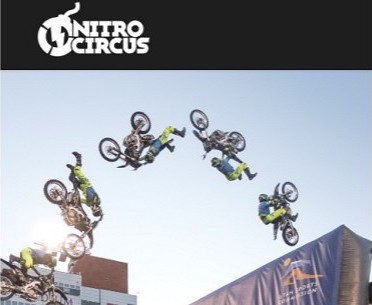 Edwards will participate in a panel session on ‘Rebranding – Opportunities, Challenges and Quick Wins’ at the event on the afternoon of Thursday, 12 December.

Edwards will discuss the development of Nitro Circus from the global action sport collective’s initial focus on the creation of content to the formation of the Nitro Circus live tour and the Nitro World Games. He will be joined by fellow panellists including Michael Miller, Head of Partnerships, Humana Inc., and Jim Scherr, CEO, World Lacrosse, with the session to be moderated by Elizabeth Pérez, the Emmy-winning Television Journalist and Presenter for CNN en Español.

Edwards, who was appointed Nitro Circus’ CEO in February 2019 after two years as President and 10 years after launch of the organisation, which he co-founded, said: “Nitro Circus has undertaken an extensive development and expansion programme in recent years which has seen it become one of the world’s leading live events brands.

“In this Panel Session at Regional SportAccord Pan America I’m looking forward to sharing our experiences and discussing rebranding beyond the more traditional, simple understanding of an organisation perhaps changing its logo or color scheme. I want to talk about how we can navigate the challenges of expanding an existing brand to diversify without travelling too far away from the ethos of the core brand.”

In 2010, the popularity of the collective led to the formation of the Nitro Circus live tour, which has travelled the globe, playing to sold-out stadiums on five continents. The company then introduced an innovative breakthrough in 2016 with the debut of Nitro World Games, completely rebooting action sports competition in the process. With over three million tickets sold to date, television programming that has aired in over 60 countries, more than 25 million engaged fans across social media and a burgeoning consumer products business, Nitro Circus is at the forefront of sports and entertainment.

Malcolm Hardman, Business Development Manager at SportAccord, said: “Nitro Circus is one of the most original and forward-thinking brands in world sport and we are delighted that Andy will bring his experience to the Conference programme at this inaugural Regional SportAccord Pan America 2019.

“Andy’s involvement in Nitro Circus’ transformation over the last decade will be of great interest to any organisations considering how they can adapt and continue to engage with sports fans in a changing world.”

For information about becoming an Exhibitor or Partner, request a brochure or contact the sales team via info@regionalsportaccord.sport or +1 954 204 3081.

Regional SportAccord is an offering of SportAccord World Sport & Business Summit whose stakeholders include: