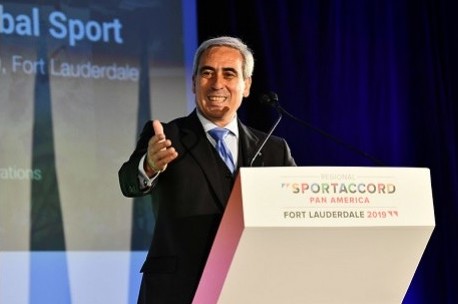 Offering his closing remarks at the end of an engaging conference program, Chiulli expressed his thanks to Greater Fort Lauderdale, Florida Sports Foundation, International Sports & Health Associates and MGO, as well as the event’s attendees, speakers and partners.

“This has been a very important occasion to meet, talk and learn,” Chiulli, who is also President of the Global Association of International Sports Federations (GAISF), said. “Fort Lauderdale is a marvellous place and we have been made to feel very much at home. My main takeaway from this event will be the atmosphere here in Fort Lauderdale. The discussions have been open and constructive and this is how friendships are built and consolidated.”

“I’d like to thank everyone who has contributed towards this inaugural event,” Hatt said. “I would also like to express my sincere thanks to nearly 550 people, representing 70 nationalities, who have come from across Pan America and also from around the world to help get this event off the ground.”

Leading sports stakeholders, influencers and decision-makers also lined up to hail the impact of the inaugural event, with the conference program focusing on the topic of ‘A United Approach to the International Sport Landscape in the Americas’.

Neven Iván Ilic Álvarez, President of Panam Sports and an International Olympic Committee (IOC) Member, said after his conference presentation: “I want to thank the organisers of this wonderful event and we will support the event in the future in any way we can.”

Nadia Comăneci, the legendary five-time Olympic gymnastics gold medal-winner, who also featured as a conference speaker, added: “I believe we have seen here at Regional SportAccord that doors are always open to discuss improvements in sport and I hope this is the start of an amazing opportunity for the future.”

Attention will now turn to the next event on the calendar – the highly anticipated 18th annual SportAccord World Sport & Business Summit from 19-24 April 2020 in Beijing, China.

Registration is open for the annual Summit, which is supported by the IOC and attended by all International Sport Federations and their stakeholders.

SportAccord is the only global sports business event attended by all the international sport federations and their stakeholders, who host their Annual General Assemblies during SportAccord.