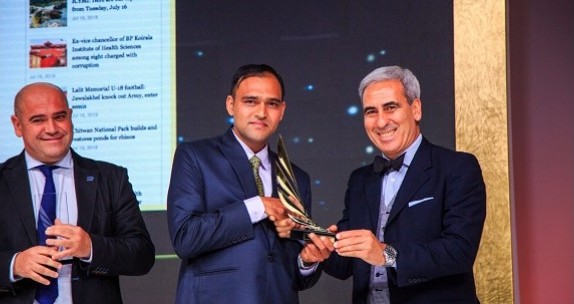 SportAccord and GAISF President Raffaele Chiulli joined the top sports journalists from around the world at the 2020 AIPS Sport Media Awards in Budapest, Hungary.

The AIPS Awards celebrated another fantastic year of storytelling and hard-hitting sports journalism, with more than 1,700 submissions received from 125 different categories. A total of 27 finalists were chosen for 11 awards, in the specialist areas of writing, photography, audio and video, as well as an additional category for young reporters.

“This was a wonderful occasion to celebrate the best in sports reporting and journalism,” GAISF and SportAccord President Raffaele Chiulli said after the Awards had concluded.

“In my role as President of GAISF and SportAccord, I often hear of incredible performances and stories of athletes achieving more than anyone could have thought possible. It is right that we can honour these journalists, who work very hard to tell these amazing stories, and I would like to congratulate all the nominees.”

NBA and Olympic champion Kobe Bryant was honoured at the start of the awards ceremony. There was a moment of silence for Bryant, who recently died in a helicopter crash with eight others, including his 13-year-old daughter Gianna.

“I am very proud of the number of submissions that we have received, and this shows that we believe in the culture of sport and what it means,” AIPS President Gianni Merlo said in the opening speech. “I can tell you that in the last meeting of the Jury, it was not so easy, many of these categories have finished with a photo-finish.”

A number of the biggest names in journalism took home awards, including Juan Arboleda from AFP, Suzanne Wrack from The Guardian, and Bob Hohler and Andrew Ryan from the Boston Globe.

To see all the winners from the 2020 AIPS Sport Media Awards, please click here.